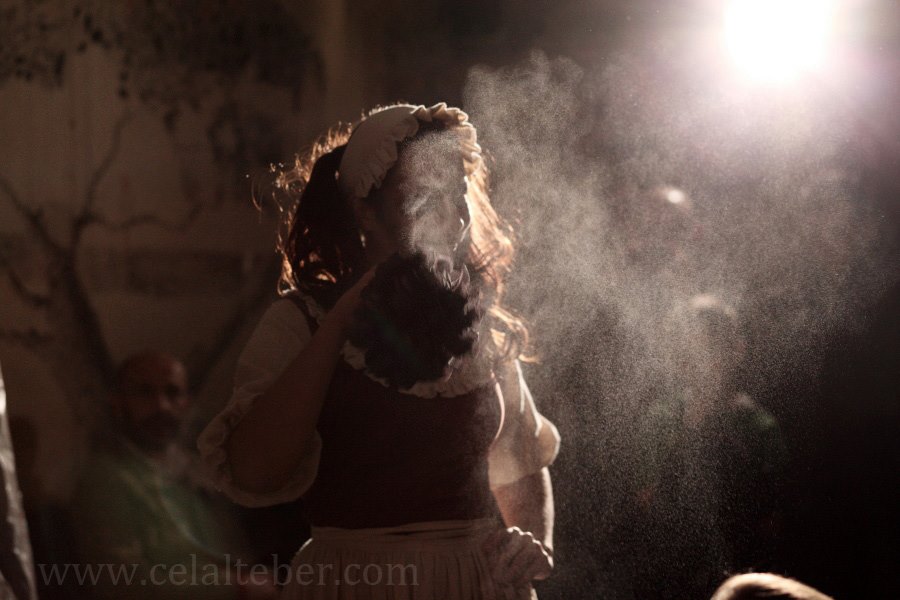 Emilia works as theatre director, playwright and film maker. Since 2010 she is Artistic Director at Odd Eyes Theatre. She has written and directed the majority of the company’s productions.  Her practice focuses on the dynamics of communication across cultures and on their surrealist, often tragicomic by-products.  An advocate for diversity as a philosophy of life, her mission is to enable cultural exchange through creative communication between individuals from every socioeconomic background, country and walk of life.

After training in Stanislavski-based acting techniques in Italy and London, Emilia travelled Europe working in theatres of all scales and scopes and roles. From the wardrobe department of Teatro dell’ Opera Donizzetti in Bologna, to fire-eating shows in public squares and burlesque performances at cabarets and festivals, including Glastonbury.

In 1999, due to an (un)fortuitous spell of homelessness in London, she got to know  Cardboard Citizens and was lucky enough to train with  Augusto Boal, founder of Theatre of the Oppressed. It was the beginning of her new journey as a story teller and change maker.

In 2022 Emilia Teglia was nominated in the Top 100 changemakers for her positive contribution to a better society through the arts. In this interview with The Big Issue Emilia reflects on her journey from selling the magazine outside Old Street tube station to founding Odd Eyes Theatre, as it reaches its 10 year anniversary.

In June 2022 Emilia directed Nine Night by Natasha Gordon, an autobiographical play about Gordon’s British-Jamaican background. Emilia’s more recent writing and directorial work, On the Line, was written with a group of young people from Camden using the Creative Debate techniques she developed through her experience with the participatory theatre of Augusto Boal. In 2019 she wrote  White Other, a surrealist play inspired by Pygmalion, by G.B. Shaw, after directing the classic masterpiece in June of the same year. The production was one big tick off her bucket list as it was an old dream of hers to direct this classic masterpiece. Her  play  #Haters toured twice in 2015 and 2017 before being adapted for screen (see FILMS below).   Close Up, a play about a raunchy 92-year-old ex-showgirl and a young woman aspiring TV director, written in response to the #metoo scandals, performed at the Pleasance Theatre and at New Diorama Theatre.

Other directorial work includes Cooking with Elvis by Lee Hall at Theatro Technis,  Content, by Hannah Puddefoot, at Theatre503. Her freelance credits include UK collaborations with Cardboard Citizens as assistant director to Adrian Jackson on Cathy and with Vital Xposure as Assistant Director and dramaturg on Hold the Hearse! by Julie McNamara alongside Terry Galloway. For Odd Eyes Theatre she also She devised and directed over 15 plays including Forum Theatre plays and 70 minute long plays Location, Location,   recipient of the Unlimited Big Local Award 2013, and How Can I Help?

Emilia’s film work spans from short films to music videos and documentaries. The adaptation of her play #Haters has been screening in art venues and schools since 2018. Her latest unscripted documentary projects with young people include collaborations with ELATT, BT Sport and Circle Collective. You can see here Connected and Community Action in Action. For some of her work with migrants, watch Conversation Club. She edited Hackney Shed’s films Find a Partner, as part of National Youth Theatre Festival 2021 and horror movie Still Watching. Both the ESOL project and Find a Partner were completely filmed on zoom during lockdown. Emilia also directed the music videos for ‘Una Saeva Walk Side by Side, filmed during the Xtinction Rebellion protests of 2019, and Come Alive in 2021.

Emilia is invited Lecturer at Goldsmiths College and at London Metropolitan University where teaching Dramaturgy, Playwriting and Theatre of the Oppressed techniques. As a facilitator she has worked at the Roundhouse, Hoxton Hall, Midkent College, Cardboard Citizens,  Tyatro Barbone and secondary schools and universities in UK, Italy and Turkey.

TRAINING
Before moving to London, Emilia trained as an actor in Italy with Beatrice Bracco (Teatro Blu), Lucia Panaro (Accademia Silvio D’Amico), Tenerezza Fattore (Cassiopea Teatro). In the UK she trained with Augusto Boal and Adrian Jackson in Theatre of the Oppressed methodologies including Forum Theatre and Rainbow of Desire techniques before graduating in Theatre Studies BA Hons and completing a Master in Cultural History with a dissertation on the history of Forum Theatre in UK.